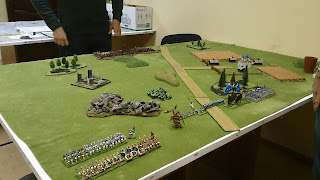 Roll for beginning of battle win Alexander. But he wanted Skaven to go first.
1st Skaven turn
Grey seer knows that skavens shouldn’t go much forward because there is a danger from High Elves cavalry wing. So one order, one move. Rat swarms go ahead of army as a shield against HE shooting.
1st High Elves turn
Only shooting brigade moves forward. No magic. No shooting. 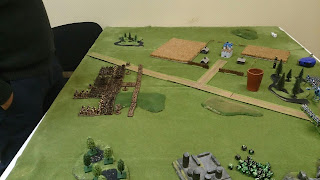 2nd Skaven turn
Same as first turn – skavens only move forward. We don’t know what we should expect from High Elves.
2nd High Elves turn
Only two orders to shooting brigade success. Other brigades stay at positions because false orders. 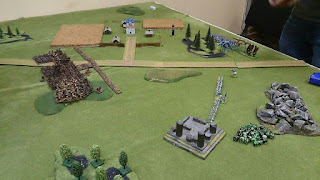 So brigade fires at the nearest enemies – Rat swarms (one stand is lost, but stay on place because they cannot be driven back). 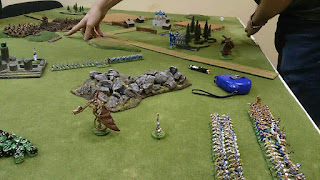 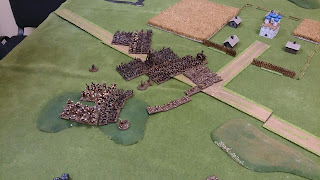 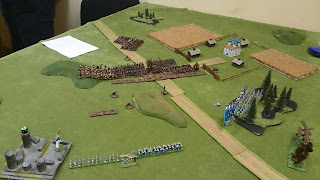 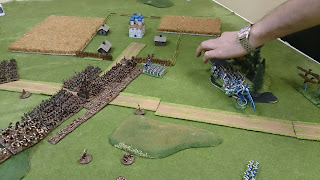 Other two spearmen units must be ordered twice – success. Cavalry finally move. Reavers even three-times. Eagles move to the village to be ready for next turn charging. 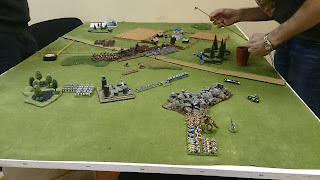 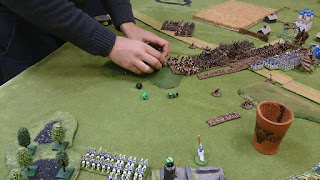 What unexperienced Grey seer didn’t expect – both of heroes riding dragons accompanied spearmen charge.
Here it is before fight. 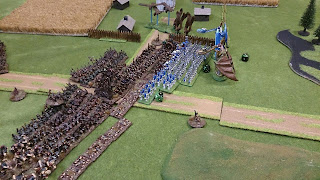 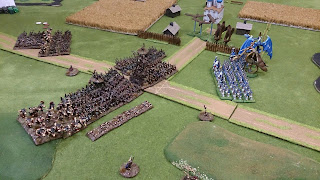 Strength of terrifying dragons is known. Grey seer choose to kill whole units instead of being pursued. Two units of rat swarms disappeared concurrently with two units of clan rats. But there are some losses on spearmen side too – two stands of one spearmen unit.
4th Skaven Turn
Counter attack begins.
Everyone who can charge by initiative. Even rat swarms are added. 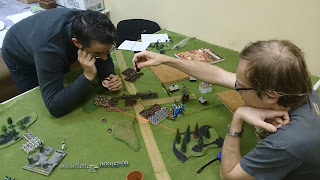 Second order for left wing false. So general must move with plague monks covering screaming bell and after using of Orb they succeed. Both units with dragons are charged without penalty from terrifying opponent (plague monks and screaming bell abilities ) 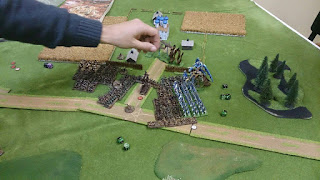 Both of scaven warlocks and Grey seers try to send Death of frenzy spell. But only one which succeed is dispelled by scroll. Without the magic whole counter-charge didn’t be strong enough to crash the units with dragons. Both spearmen units with dragons left only one stand. Do not luck for skaven, very bad rolls to hit.
On the other side of battlefield the scaven hero leads brigade of Rat ogres to charge into the reavers. 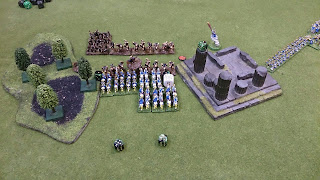 And they succeed. After a few rounds of combat rat ogres killed last unit of reavers. Reavers are spread and disappear. Surviving last stand of Rat ogres with hero try to find cover in the ruins. 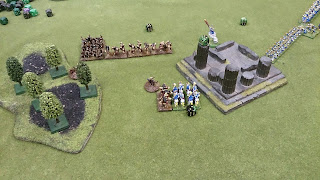 4th High elves Turn
High elves general ordered to surround right wing of skavens.
The strongest brigade of elves – Silver helms and chariots stand in open against rat ogres and plague monks. But last order to charge don’t succeed because penalties of too far from their commander. Chance for skaven! 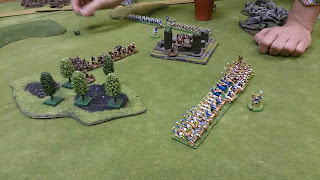 Shooting of high elves destroy the last stand of Rat ogres with hero in ruins of temple and drive back remaining units into the wood. 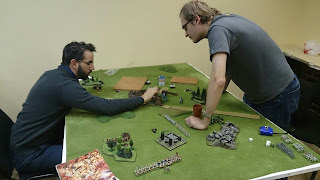 Both heroes move to other (full) units of spearmen and charge weakened rat clans. Eagles charge from the village. 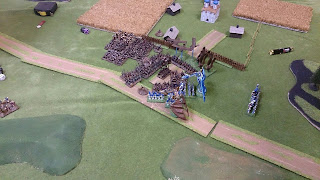 After combat with dragons there are 3 units of spearmen with one stand remaining. 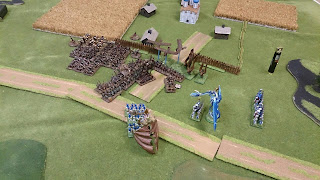 Skaven player evaluation:
It was almost 6 from 8 needed to break point + two dragons = 810 points => not enough luck for me. I had weak center of my army formed only by swarms and clan rats. They were easy target for terrifying dragons. So it will change for next battle.

High Elves player evaluation:
Lady luck was a bad girl for both of us, but for skaven it became critical in some point. I think, Daniel should add more specialised units: second Doom Wheel, some Jezzails, maybe some Gutter Runners to give command penalties for enemies. Swarms are good, but they are too soft without any armor. To say about tactics, skaven can be more aggressive with their command bonus from Screaming bell. Heroes increase their CV to 9 and can move brigades as good as a Grey Seer.
I played many times againt Dwarfs and sometimes I took command of Dwarven army. If your army consists only of infantry, you must have something with treat-range more than 20cm. If you do not take any shooters or warmachines, you need very good armor or terrifying creatures. Or a lot of luck.
Posted by Unknown at 08:20 1 comment:

Warmaster is a ruleset for tabletop wargames written by Rick Priestley, published by Specialist Games (a division of Games Workshop, and set in the Warhammer Fantasy setting. It is different from Warhammer Fantasy Battles in both appearance and gameplay. It is intended for 10 –12 mm miniatures. Basic troops are based on stands, of which typically three make a unit. Generals, Heroes and Wizards are mounted individually or with their retinue.

We are community from Czech republic [CZ] and we want to say: Warmaster is living.
Why Revolution ? Because we are working on and testing updated version of WM, which will contain some aspects of WM Ancients. You can find more about WMR here.
Last version of WMR rules (v 1.0) for download is here.
Contacts:
aldhick@seznam.cz Aleš Navrátil
dan.krbecek@gmail.com Daniel Krbeček